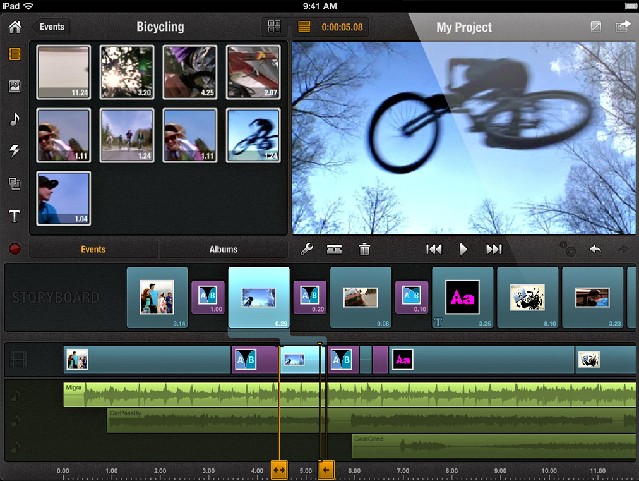 Avid Studio for iPad. This sh*t just got real, yo!

Avid Studio ($4.99) has just hit the App Store, and it’s SWEET. But, it also suffers from a few shortcomings.  Just by looking at the app’s primary editing screen, you know Avid took their time in crafting an easy to understand, powerful, and deceptively simple interface.

In one quarter of the screen, users view thumbnails of all their media (videos, photos, music, transitions, etc.).  The description of the app says you can also access media from external devices via the iPad camera connection kit.  You can also capture video and photos from within the app.

Media is added to your edit with a simple drag and drop.  Like most editing environments, Avid Studio is based on a timeline metaphor, but unlike its predecessors, this app has gone one step further by adding what it calls a ‘storyboard’ (a strip of small square thumbnails directly under the timeline).  In the Storyboard strip, users can quickly tap and drag clips to reorder them, while keeping an eye on an overview of the entire project. While that sounds simple enough, most iPad and iPhone video editors lack this ability.  Typically, users have to zoom in and out in order to re-orient themselves.  By connecting their timeline with the storyboard strip, Avid Studio offers a BIG time savings.

The app also features custom motion titles, picture in picture effects, and 3D layered effects (using in-timeline drop-zones). Most are good-looking, although some suffer from templatitis.

Edits can be fine tuned (down to the frame) using the app’s built-in precision editing tools.  Your project can be played back at any time in the preview area or full screen, although more complex effects may require rendering (not the speediest process). The app functions equally well in portrait and landscape mode, although landscape does allow for a wider view of your timeline.

Once your satisfied with your cut, you can render and upload your video to all the usual places (Facebook, Youtube, email, etc).

All is not perfect, however. I experienced a LOT of crashing on my iPad 1 (it performs much better on an iPad 2).  So much crashing, in fact, that at some points I couldn’t even get the app to launch.  Clearly, that needs to be addressed quickly or Avid stands to upset many potential customers.  Also, I’d like to see the addition of more transitions (which is an odd request from me since I hate most transitions).  And finally, if you hadn’t already guessed, Avid Studio is still simply a consumer app.  There’s no EDL or XML export. So as of now, you can’t use Avid Studio as an offline editor.  Perhaps that will change as the iPad seeps deeper into the filmmaking community.

Considering Avid’s long history as a leader in non-liner editing, stepping in to the consumer market is a bold step. All in all, Avid Studio is a beautifully simple editor with an absurdly low price.  If you want to cut video on your iPad, this app is a great place to start (although if you’re an iPad 1 owner, you should wait for a stable update).