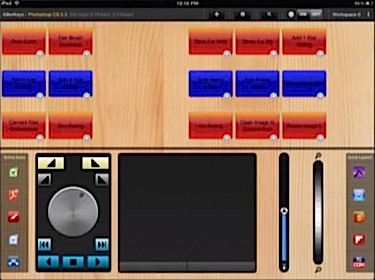 KillerKeys for iPad Can Control Video Apps on your Mac & PC

There are approximately 3,000,000 booths at the NAB expo in Vegas (slight exaggeration), so very it’s easy to miss something cool, especially when major exhibitors are assaulting your senses with strobe lights and showgirls.  Thankfully, I DIDN’T miss KillerKeys, a brilliant suite of apps for Mac, PC and iPad.

The desktop version of KillerKeys runs alongside your favorite apps (Photoshop, Premiere, Word, etc.) and allows you to create and customize floating pallets of shortcut buttons linked to application functions that would normally be buried within nested menus, or unfamiliar dialog boxes.  For example, let’s say you’re a Photoshop user, but you curse Adobe for not providing you with a floating set of buttons that can quickly switch between several opacity settings. Well, now with KillerKeys, you can create those buttons yourself.  Better yet, when you switch from application to application, KillerKeys is smart enough to switch your custom button sets as well.

That’s mighty cool, but it’s the soon-to-be-released KillerKeys iPad app ($9.99) that really has me pumped. With this app, users can interact with their custom buttons and controls right on their iPad screen, effectively turning their iPad into a touch-screen remote control for their desktop apps!  In addition to buttons, the KillerKeys iPad app can display other controls like sliders, and more importantly, a job/shuttle knob.

The desktop version of KillerKeys is available in 5 different editions, with different price points ranging from $9.99 (for the Home & Student Edition) to $89.95 (for the Master Collection). The PC version is available now, and the Mac & iPad versions will be available soon.

For a better understanding, have a look at the video I shot (poorly) at the KillerKeys booth.  You can also check out the official KillerKeys promo video. Both are below.